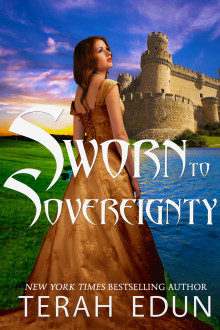 I am thrilled to let you know that Sworn To Sovereignty is now live on all retailers. You should know that we’re back in the imperial courts of Sandrin now and massive plans are happening. Rebellion among them. There is also an imperial wedding in the works, so enjoy Book 8 and get ready for the battle to come!

/\/\/\All links above but Kobo is having issues with processing this week so there’s a small delay on that retail site./\/\/\

Last but not least, I’ve pulled Blades Of Magic: Crown Service #1 from Kindle Unlimited and it is now available on ALL retailers, including Barnes & Noble, Kobo, Google Play, and iBooks.

If you’ve never read the Crown Service series, you’re in for a treat. It’s set centuries before the start of the Courtlight series and features a warborn protagonist by the name of Sara Fairchild. She is hard where Ciardis sweet, cunning where the Weathervane is trusting, and above all bent on revenge for crown and empire! Links to Crown Service here: teedun.com/crownservice

My next publishing update will be about Blades Of Illusion: Crown Service #2 and the release of Sworn To War: Courtlight #9!